The Legend of Nu Kwa 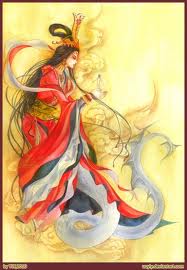 This story comes from China. It begins with a giant egg. The egg was filled with chaos; in fact, the egg was so huge that it was filled with absolutely everything. Darkness and light were mixed together inside the egg and everything was in so much of a muddle that nothing was anything at all. Sleeping in the middle of all this was a giant - Pan Gu.

Pan Gu slept for thousands of years, but eventually he woke up and stretched himself, as he did, he broke the egg. The darkness and light separated from each other and poured out. Part of the egg drifted downwards and became the earth and part floated upwards and became the sky. The world had begun....

I'm so sorry to do this to you, but this post has been moved to my new website Widdershins (hosted at shirleytwofeathers.com) and can be found in it's entirety here: The Legend of Nu Kwa

Posted by Shirley Twofeathers at 3:30 AM No comments: