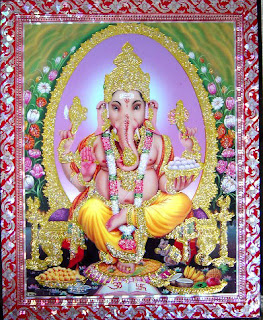 It is believed that Lord Ganesha bestows his presence on earth for all his devotees during this festival. It is the day Shiva declared his son Ganesha as superior to all the gods, barring Vishnu, Lakshmi, Shiva and Parvati. Ganesha is widely worshiped as the god of wisdom, prosperity and good fortune and traditionally invoked at the beginning of any new venture or at the start of travel.

The festival, also known as Ganeshotsav ("festival of Ganesha") is observed in the Hindu calendar month of Bhaadrapada, starting on the shuklachaturthi (fourth day of the waxing moon period). The date usually falls between 19 August and 20 September. The festival lasts for 10 days, ending on Anant Chaturdashi (fourteenth day of the waxing moon period)....

... I'm so sorry to do this, but this post has been moved to my new website, The Pagan Calendar, and can be found in its entirety here: Ganesha Chaturthi
Posted by Shirley Twofeathers at 7:28 PM