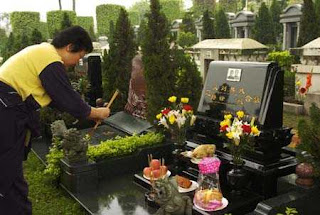 Qingming Festival (also known as Pure Brightness Festival or Tomb-sweeping Day), falls on either April 4th or 5th of the Gregorian calendar. The Chinese respect for filial piety and careful attention to funeral rites is visibly manifested in the custom of ancestor worship. And since ancient times, a day has been designated for sweeping the tomb and honoring one's ancestors. Though different in each family, these rites are usually performed on the first few days prior to or following Ching Ming, one of the traditional solar divisions falling in early April, when the frost retreats and spring returns bringing renewal to all living things.

When visiting the tomb, people usually bring the dead person's favorite food and wine, and paper resembling money . This is in the hope that...

... I am so sorry to do this to you, but this post has been moved to my new website, The Pagan Calendar, and can be found in its entirety here: Tomb Sweeping Day
Posted by Shirley Twofeathers at 4:30 AM

Email ThisBlogThis!Share to TwitterShare to FacebookShare to Pinterest
Labels: Ancestors Spells and Magicks, April Spells and Rituals, Spells for the Dead