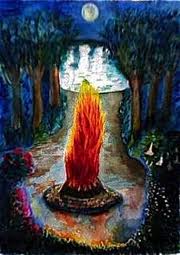 For the Celts, Beltane marked the beginning of the pastoral summer season when the herds of livestock were driven out to the summer pastures and mountain grazing lands. In modern Irish, Mí na Bealtaine ('month of Bealtaine') is the name for the month of May. The name of the month is often abbreviated to Bealtaine, with the festival day itself being known as Lá Bealtaine. The lighting of bonfires on Oidhche Bhealtaine ('the eve of Bealtaine') on mountains and hills of ritual and political significance was one of the main activities of the festival....

... I am so sorry, but this post has been combined with another and moved to my new website, The Pagan Calendar. It can be found in its entirety here: Beltane
Posted by Shirley Twofeathers at 4:00 AM

Email ThisBlogThis!Share to TwitterShare to FacebookShare to Pinterest
Labels: Beltane, May Spells and Rituals