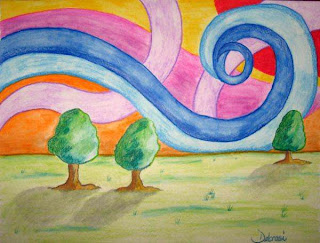 There are many spells designed to carry a secret wish into the universe when the productive powers of creation can bring its realization into being. Nearly all spells make use of the tremendously powerful process of creative visualization.

The following spell courts the favor of the 4 winds or the energies of the compass points. For this spell you will need to ascertain North then find South, East and West.

The 4 winds were given magical names by the ancient Greeks - Boreas, Eureus, Notus and Zephyrus - it is these forces together with those of the elemental spirits of air, water, fire and earth, that are called upon in the spell to carry your wish to the four points of the universe....

I am so sorry to do this to you, but this post has been moved to my new website, Book of Shadows hosted at shirleytwofeathers.com, and can be found in its entirety here: Four Winds Wishing Spell

Posted by Shirley Twofeathers at 5:00 AM