New Year's Eve is traditionally a time for assessing the past twelve months and for looking ahead to the New Year. Numerous customs are still retained in Europe and the United States, including the idea of kindling a new light from the old. This can be achieved in a number of ways, including the following simple ceremony. 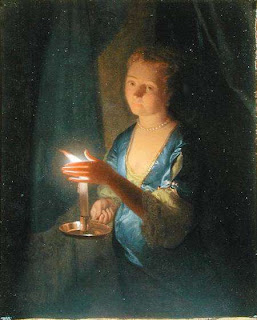 At a few minutes to midnight, put out all of your lights except for a single candle or a lantern (it's important that the light be a living one rather than electric). Send someone outside (traditionally it is someone who has dark hair) with the light, which they must guard and protect from the weather. As the clock strikes twelve have that person knock on the door....

I am so sorry to do this to you, but this post has been moved to my new website The Pagan Calendar (hosted at shirleytwofeathers.com) and can be found in its entirety here: First Footing
Posted by Shirley Twofeathers at 4:00 AM