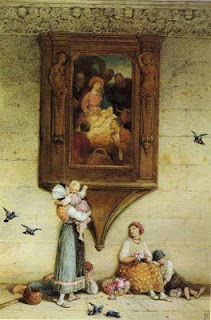 Today (December 28) is Dyzymas Day, also known as Holy Innocent's Day, or Childremass. This day has always, in one way or another been associated with children. In more recent times the connection is specifically with the children slaughtered at the orders of Herod, who feared the prophecy of the Magi that a new King of the Jews had been born in Judea.

Throughout the Middle Ages this day was considered particularly unlucky and it was believed that no task begun on December 28th would prosper. ...

In Northamptonshire it was known as Dyzymas Day and a local saying was: "What is begun on Dyzymas Day will never be finished."

A more barbaric practice that continued well into the eighteenth century was to beat children on this day....

I am so sorry to do this to you, but this post has been moved to my new website The Pagan Calendar (hosted on shirleytwofeathers.com) and can be found in its entirety here: Dyzymas Day