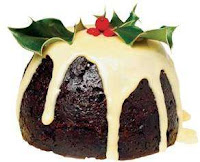 Figgy pudding is a pudding resembling something like a white Christmas pudding containing figs. The pudding may be baked, steamed in the oven, boiled or fried. The history of figgy pudding dates back to 16th century England. Its possible ancestors include savory puddings such as crustades, fygeye or figge (a potage of mashed figs thickened with bread), creme boiled (a kind of stirred custard), and sippets. In any case, its methods and ingredients appear in diverse older recipes.

Today, the term figgy pudding is popularized mainly by the Christmas carol "We Wish You A Merry Christmas," which includes the line, "Now bring us some figgy pudding" in the chorus....

... I am so sorry to do this to you, but this post has been moved to my new website, The Pagan Calendar, and can be found in its entirety here: Figgy Pudding
Posted by Shirley Twofeathers at 4:43 PM