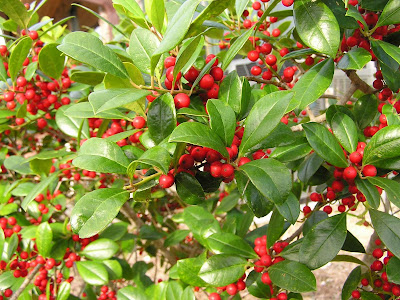 The Holly tree (of which there are well over 150 species) can grow (albeit very slowly) to be as high as fifty feet and is native to most of Central and Southern Europe. Its white, star-shaped flowers bloom in the Spring and it bears shiny red berries in Autumn which last throughout the Winter season. The leaves of the Holly are shiny, dark green in color, elliptical in shape and have spiny points. In order to produce berries, both a male and a female tree are required. Only the female tree produces berries which, although lovely to look at, are poisonous....

... I am so sorry, but this post has been combined with another and moved to my new website, Magickal Ingredients. It can be found here: Holly Magick and Lore
Posted by Shirley Twofeathers at 7:07 AM