Hecate, Queen of the Night

Hecate (Hekate) is Queen of the Night, the Spirit World, and Witchcraft. Her epithets include "She Who Works Her Will." Although today most associated with Greek mythology, her name, meaning "influence from afar," acknowledges her foreign origins. 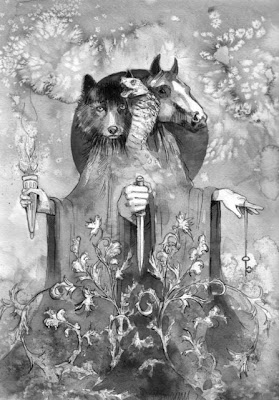 Generally believed to have first emerged in what is now Turkey, she was not an obscure goddess. Hecate was at one time chief deity of Caria, now western Turkey, and was eventually widely worshiped throughout Europe, Western Asia, and Egypt. Records of formal worship date from eighth century BC to the fourth century AD, although as magic fell from grace she became an increasingly disreputable spirit. All Hecate's myths clearly identify her as a witch and matron of magical arts....

... I am so sorry to do this to you, but this post has been expanded, and moved to my new website, The Powers That Be. It can be found in its entirety here: Hekate - Queen of the Night
Posted by Shirley Twofeathers at 6:40 PM

Email ThisBlogThis!Share to TwitterShare to FacebookShare to Pinterest
Labels: Gods and Goddesses, Hekate