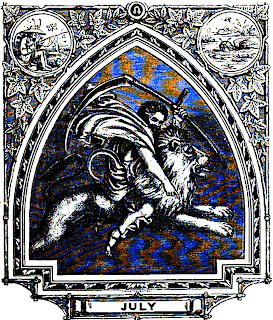 At first the Romans called this month Quintilis, but later renamed it Julius after Julius Caesar. The Greek Olympian was held for about a week in July. This festival in honor of Zeus consisted of competitions in athletics, drama, music, and other activities. During the time of the Olympian, all participants were given safe-conduct to and from the games. The constant petty Greek squabbles were put aside. A victory in the Olympian was a great achievement, both for the individual and for their city....

... I am so sorry to do this to you, but this post has been combined with another, and moved to The Pagan Calendar, it can be found here: July Magick and Lore
Posted by Shirley Twofeathers at 7:15 AM

Email ThisBlogThis!Share to TwitterShare to FacebookShare to Pinterest
Labels: July Spells and Rituals