The Festival of Mens 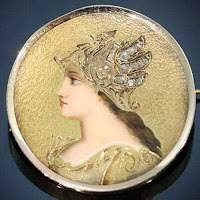 According to many pagan calendars, May 8th is listed as "the festival of Mens , the Roman goddess of mind and consciousness." I did not, however, find any information on Mens or on a festival of Mens - what I did find was this small excerpt at Wikipedia:

By a process of folk etymology, the Romans could have confused the phones of her foreign name with those of the root men- in Latin words such as mens meaning "mind", perhaps because one of her aspects as goddess pertained to the intellectual....

... I am so sorry to do this to you, but this post has been moved to my new website, The Pagan Calendar, and can be found in its entirety here: The Festival of Mens
Posted by Shirley Twofeathers at 7:00 AM

Email ThisBlogThis!Share to TwitterShare to FacebookShare to Pinterest
Labels: Ancient Roman Festivals, May Spells and Rituals