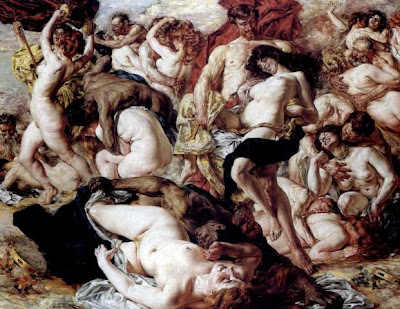 Nowadays, whenever we hear the term Bacchanalia getting thrown about it is typically used to describe wild partying that has gotten way out of control. In the popular imagination, the Bacchanalia are often characterized by frantic participants moshing together in a pit of sexual orgies. The Bacchanalia were free-spirited and sexually charged festivals that involved pagan mysticism, wild sex and divine communion which allowed its celebrants’ to achieve states of euphoria that hovered between divine ecstasy and the oblivion of nothingness. Those who have spent a week at one of the Hedonism resorts in Jamaica would probably find the sexually charged atmosphere of the Bacchanalia remarkably familiar....

... I am so sorry, but this post has been moved to my new website, The Pagan Calendar, and can be found in its entirety here: The Bacchanalia
Posted by Shirley Twofeathers at 5:38 AM