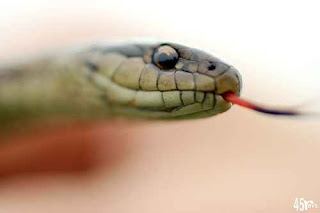 The snake dwells in so many places, climates and environments, comes in so many colors, shapes and sizes that this creature can be said to be one of the most versatile of all. Indeed snakes represent versatility, transmutation and change, their natural inclination to “shed their skins” leaving behind the old, and adapting to the new, supports this idea.

The snake has been, throughout the ages, controversial in many regards. Some see the snake as a bearer of evil or bad news, but most see the snake as the healer and spiritual icon that it is. Like any creature, human or animal, they possess both noble and questionable qualities. Some people fear them and many more are charmed by them....

... I am so sorry, but this post has been moved to my new website, The Powers That Be, and can be found in it's entirety, along with a lot more information here: Snake Magick and Lore


Most of us recognize the snake as the symbol of physicians and alchemists, which shows two snakes wrapped around a staff. This again, supports their totem reputation as healer. Snakes are highly respected in India and their lore and symbolism is highly regarded by their culture; Vitana, the mother of snakes, is the symbol of water and the underworld and the Goddess Shiva always wears snakes on her body as jewelry, which represents sexuality. Native Indians also see the snake as a representation of fertility and healing.

Those who are said to posses Snake like qualities have control over their emotions, excellent intuition and the ability to heal quickly. They are slow to anger but have enormous coiled power within them and will strike with control and precision when they must. Some snake type people, like their reptile counterparts, will give their opponent fair warning before striking, others will attack powerfully and without any warning. Snakes rarely, if ever, attack unless provoked, which is an excellent lesson for all of us to learn. Others should be on their guard when in snake territory and should respect the snake’s province.

Snakes awaken spiritual and magical intuition in the person who chooses this totem or is chosen by it. Snakes are associated with unseen creative forces at work. With the snake totem the powers of intuition and observation becomes keener and more precise. As snakes represent change and intuition the combination of these characteristics will allow for great new developments in life and the proper instinct for deciding which changes will be effective and which should not be made. They represent openness to new experiences, and thus, opened horizons.

The Snake in the wild is generally clam and peaceful. They hunt for food when hungry and can go long periods of time without eating again. They bask on warm rocks and will usually not attack unless prompted. To annoy or provoke a snake is a very unwise mistake, which many people make. Because of their calm and somewhat shy nature, many believe that they are too still or quiet to be much harm, however, as many have discovered, while a snake may seem as though it is still and unaware, if pressed they can and will deliver a dangerous blow or bite, sometimes without warning, that can leave permanent damage or even cause death to its victim.

Snakes are very sensitive to their environment, they are silent, calm creatures and seem to be very serene on the outside, but within this animal is coiled power that can deliver lethal blows, with well timed and startling accuracy. The snake is a powerful totem, symbolizing eternity, wisdom, transformation and intuition. Their wisdom is expressed as healer and the snake has been used as a symbol of this for centuries.

Source: Mani Zone
Posted by Shirley Twofeathers at 7:36 AM