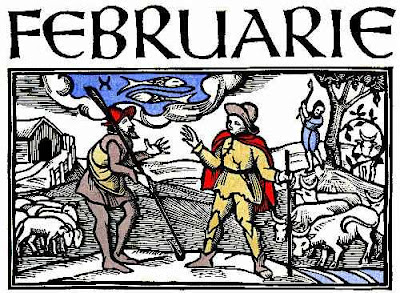 February was named for the Roman goddess Februa, mother of Mars. As patroness of passion, she was also known as Juno Februa and St. Febronia from febris, the fever of love. Her orgiastic rites were held on February 14th, St.Valentine's Day. In Norse traditions, she is equated with Sjofn.

The Irish called this month Feabhra or an Gearran, the gelding or horse. The horse was used to draw the plough, but Gearran also means 'to cut' and 'Gearran' can be used to describe the 'cutting' Spring winds. To the Anglo-Saxons, this was Solmonath, "sun month," in honor of the gradual return of the light after the darkness of winter. According to Franking and Asatru traditions, this month is Horning, from horn, the turn of the year....

... I am so sorry to do this to you, but this post has been combined with another, and  moved to my new website The Pagan Calendar hosted at shirleytwofeathers.com, and can be found in its entirety here: February Magick and Lore
Posted by Shirley Twofeathers at 2:59 AM

Email ThisBlogThis!Share to TwitterShare to FacebookShare to Pinterest
Labels: February Spells and Rituals