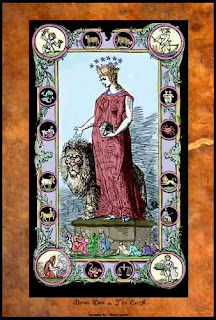 Bona Dea ("The Good Goddess") was a divinity in ancient Roman religion. She was associated with chastity and fertility in women, healing, and the protection of the Roman state and people. According to Roman literary sources, she was brought from Magna Graecia at some time during the early or middle Republic, and was given her own state cult on the Aventine Hill.

Bona Dea was worshipped only by women. In fact, the presence of a man at rites in her honor were a sacrilige. May 1 was the annual, state-sponsored festival to Bona Dea at her temple. In early December, there was another private festival as well...

... I am so sorry to do this to you, but this post has been moved to my new website The Powers That Be, and can be found in its entirety here: Bona Dea
Posted by Shirley Twofeathers at 1:29 AM

Email ThisBlogThis!Share to TwitterShare to FacebookShare to Pinterest
Labels: Ancient Roman Festivals, Gods and Goddesses, May Spells and Rituals