"Yule - A Celebration of Light and Warmth" 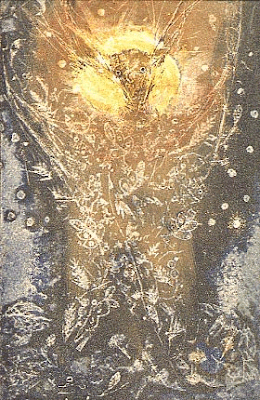 Yule, also known as Midwinter and Winster Solstice, occurs on the Winter Solstice. This is the time of year when the sun is at its lowest point in the sky (Northern Hemisphere) and the Sun enters the sign of Capricorn. This usually happens between December 20th and December 23rd. The sun will only rise higher and higher in the sky from this point onward. Since it appears that the sun's light is growing as each day passes after this one, this holiday is celebrated as the birth of the sun.

The word Yule comes from the Old Norse "iul," meaning wheel ,and refers to the 'wheel of the year', (or the idea of the year, seen as a wheel turning as the seasons change)....

I am so sorry to do this to you, but this post has been moved to my new website The Pagan Calendar (hosted at shirleytwofeathers.com) and can be found in it's entirety along with even more information here: Yule

Posted by Shirley Twofeathers at 4:13 AM