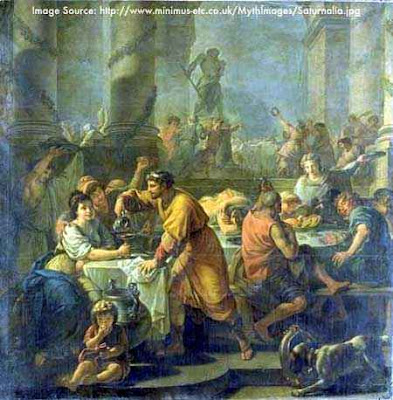 The Saturnalia was an ancient Roman festival in honor of Saturn, celebrated on the 17th of December. Saturn being an ancient national god of Latium, the institution of the Saturnalia is lost in the most remote antiquity. Falling towards the end of December, at the season when the agricultural labors of the year were completed, it was celebrated by the country-people as a sort of joyous harvest home, and in every age was viewed by all classes of the community as a period of absolute relaxation and unrestrained merriment. The festival was extended in later times to three and still later to seven days....

... I am so sorry to do this to you, but this post has been combined with another, and moved to my new website, The Pagan Calendar, and can be found here: Saturnalia
Posted by Shirley Twofeathers at 5:28 AM