Character of the Days of the Moon 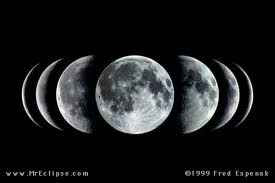 Notes: I am assuming that this counting of the days begins and ends with the new moon. Notice that there are 29 days listed even though it only takes the moon 27.3 days to orbit the earth. I also found the juxtaposition of the Major Arcana of the Tarot with Old Testament happenings, and the Goddess Hecate (see day 27), an interesting mix.

1. The Juggler, or Magus— The first day of the moon is that of the creation of the moon itself. This day is consecrated to mental enterprises, and should be favorable for opportune innovations.

2. Pope Joan, or Occult Science — This day is propitious to revelations, initiations, and great discoveries of science.

3. The Celestial Mother, or Empress— The third day was that of man's creation. So is the moon called the MOTHER in Kabbalah, when it is represented in association with the number three....

... I am so sorry to do this to you, but this post has been moved to my new website, The Pagan Calendar, and can be found in its entirety here: Character of the Days of the Moon
Posted by Shirley Twofeathers at 6:00 AM