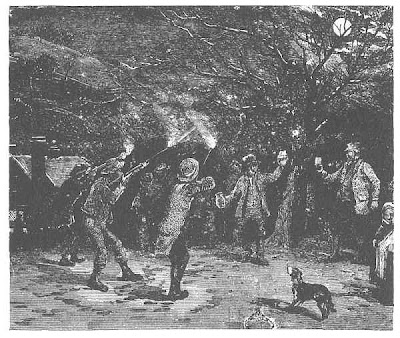 Wassailing the trees occurred on old "twelfth night", the 12th night after Christmas eve, or January 17th on the old calendar. Obviously traditions varied, but in Devonshire, Herefordshire and in other parts of the West Country of England (as well as elsewhere no doubt) families would hold a feast with cakes, cider and in some areas beer and ale too. After a time of eating and drinking everyone trooped out to the orchard to wassail the trees, and wake them up from winter for the coming season as well as scare off any bad energy, spirits or demons .

Ale, beer or cider soaked toast, in some areas special cakes, would be placed in the tree branches or in a fork of the tree, and then be splashed with more cider. Trees might be beaten with sticks...

I am so sorry to do this to you, but this post has been moved to my new website, The Pagan Calendar (hosted at shirleytwofeathers.com) and can be found in its entirety here: Twelfth Night Wassail Celebration

Posted by Shirley Twofeathers at 5:43 AM