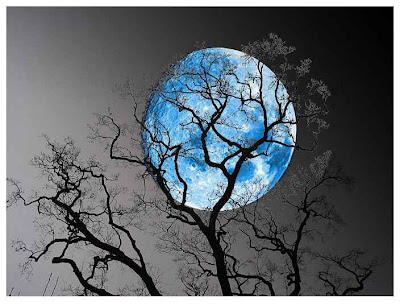 Tomorrow is New Year's Eve. It's a full moon, and it's a Blue Moon. What does that mean?

IN MODERN times, the term "blue moon" is defined as the second full moon occurring within a single month. By a somewhat older definition, it's the third full moon in a season that has four — instead of the normal three — full moons. Either way, it's an out-of-the-ordinary phenomenon occurring only once every few years. Hence the phrase, "once in a blue moon....

... I am so sorry to do this to you, but this post has been moved to my new website, The Pagan Calendar, and can be found in its entirety here: Blue Moon Magick and Lore

Posted by Shirley Twofeathers at 1:45 AM

I am waiting for mine next blue moon evening...i just love them.