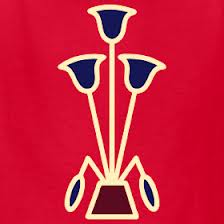 Crocodiles, like snakes, are simultaneously fearsome, dangerous creatures and potent symbols of spiritual and psychic protection. Pregnant Isis, after all, hid in the crocodile infested swamps of the Nile Delta. It was the safest spot she knew.

In ancient days, the papyrus plant, which once lined the Nile, was a hieroglyphic emblem for Lower Egypt, especially that Nile Delta swampland. It also served as a protective emblem from crocodiles, lending new meaning to Moses' cradle on the Nile, formed from papyrus.  This symbol (shown here) can be used in a variety of ways to create a protective talisman.

From: The Element Encyclopedia of 5000 Spells