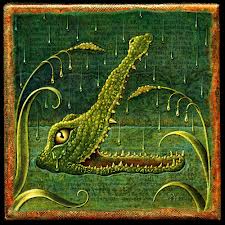 It was once thought that crocodiles could be created by new combinations of matter, instead of by natural birth. The ancient roman historian, Pliny said that the crocodile was the only land animal which lacked the use of its tongue. It was believed to conceive by the ear and bring forth by the mouth.

An old story from Madagascar is that crocodiles and lizards come from the same nest or den by the side of a river. When the eggs are laid and numerous little ones are crawling about, the crocodile comes out of the water and beats the ground with its tail so as to frighten the young ones. Some take to water, and others to land. The ones that go to land never grow any bigger and remain as lizards, but those in the water grow to be crocodiles....

... I am so sorry, but this post has been combined with another and moved to my new website, The Powers That Be, it can be found here: Crocodile Magick and Meaning
Posted by Shirley Twofeathers at 5:30 AM