I found this account of Mother March in an old book about Bulgaria, published in 1877. I love the way they used to celebrate the month of March. It occurs to me that it might be fun and informative to watch the weather this month and assign certain days to certain people in my life and see what happens. 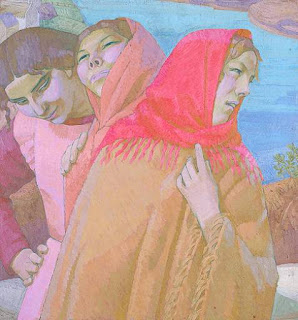 The month of March, which falls in the Spring equinox is called by the Bulgarians, Baba Mart, Old Mother March, and is the only female month of the year, the others being considered as masculine. March in Bulgaria is like April in England, inconstant and capricious, alternating between storms and sunshine; and it is here specially dedicated to the fair sex, who during its continuance enjoy complete idleness, doing no work, and asserting a sort of temporary superiority over their husbands, which sometimes even goes to the length of administering a thrashing, without fear of reprisal.

In order not to displease Baba Mart, the women do not even smear the floors of their houses with clay (a work which is usually performed every week), wash, weave, or spin; for if they were to do so...

....I am so sorry to do this to you, but this post has been moved to my new website, Pagan Calendar, and can be found in its entirety here: Mother March
Posted by Shirley Twofeathers at 4:00 AM

Email ThisBlogThis!Share to TwitterShare to FacebookShare to Pinterest
Labels: March Spells and Rituals