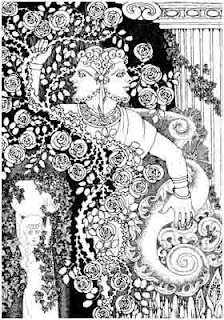 In ancient Rome, January 9th was the Agonalia or Festival to Janus, god of gates and doorways. There seem to be many different legends about the history of Janus. One has him the son of Uranus and Hecate. Another says he had a son named Tiberinus whose accidental drowning named Roma's river. According to another he was a son of Apollo and the first king of Latium. His colony near the Tiber is supposed to have given the name to the Janiculum Hill. Another story says that Janus welcomed Saturn to earth after the latter was driven out of Olympia by Zeus.

Janus was very important in Rome because the weakest point in any building or municipality is its doorway. Anything from human enemies to evil spirits could enter via that route. So strong was this feeling that Romans always carried corpses out of buildings feet first so that the departed spirits would be less likely to find their way back in....

I am so sorry to do this to you, but this post has been moved to my new website, The Pagan Calendar (hosted at shirleytwofeathers.com) and can be found in it's entirety here: The Agonalia