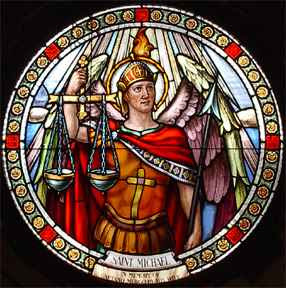 There is evidence that Michaelmas was once celebrated later in the year, on the 10th or 11th of October, this is now referred to as 'Old Michaelmas Day'. There may also have been a time when both dates for Michaelmas were acknowledged.

I like the legend of teenage girls collecting crab apples at the beginning of September, and arranging them in the initials of boys they fancied. If they could still discern the initials on Old Michaelmas Day...

... I am so sorry to do this to you, but this post has been combined with another and moved to my new website The Pagan Calendar, it can be found here: Michaelmas - The Christianized Mabon

Posted by Shirley Twofeathers at 5:15 PM