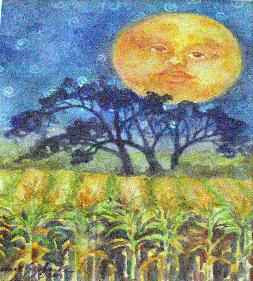 In late August, we celebrate the beginning of the Corn Moon. This moon phase is also known as the Barley Moon, and carries on the associations of grain and rebirth that we saw back at Lammastide. August was originally known as Sextilis by the ancient Romans, but was later renamed for Augustus (Octavian) Caesar. Some Native American tribes knew that the sturgeon of the Great Lakes and Lake Champlain were most readily caught during this full Moon, for them it was the Full Sturgeon Moon. Others called it the Green Corn Moon or the Grain Moon....

... I am so sorry to do this to you, but this post has been moved to my new website, The Pagan Calendar, and can be found in its entirety here: The Full Corn Moon
Posted by Shirley Twofeathers at 8:06 PM

I was just admiring the moon the past couple of nights. Instead of "fearing" the full moon (as some superstitions told me in the past) I would love to channel it's energy for good!

I am not that deep into any of these practices - but intrigued!