The Seven Deities of Luck 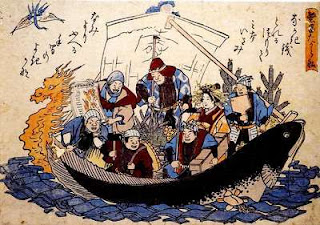 In Japan, January 1st is the Shichi Fukujin, the Celebration of the Seven Deities of Luck.

Shichi Fukujin is usually translated as "Seven Spirits of Good Fortune," but literally means "Seven Happiness Beings." Six are male and one is female (Benten). Each is an important, powerful spirit. They hail from different traditions. Unlike the comparable Seven African Powers, they do not all derive from the same spiritual base. Some are Shinto, some Buddhist; Hotei originally derives from Chinese Taoist traditions, but wherever they came from, all are now significant to Japanese folk religion....

I am so sorry to do this to you, but this post has been moved to The Pagan Calendar, hosted at shirleytwofeathers.com, and can be found in its entirety here: Celebration of the Seven Deities of Luck

Posted by Shirley Twofeathers at 5:00 AM