Selene - Goddess of the Moon 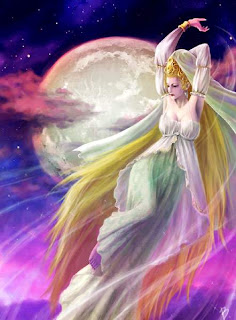 Also known as: Mene (as in month or menstruation), and Latin Luna

Selene is an ancient goddess of the moon. Comparatively little information regarding Selene's veneration and rituals survives although she is described as "great in magic" and was apparently invoked in magic spells. Her parents are Titans, Hyperion and Theia. Helios, the sun, is her brother. Many of her functions were later transferred to Artemis as Helios' were to Apollo....

... I am so sorry to do this to you, but this post has been moved to my new website, The Powers That Be, and can be found in its entirety here: Selene - Goddess of the Moon
Posted by Shirley Twofeathers at 5:00 AM

Email ThisBlogThis!Share to TwitterShare to FacebookShare to Pinterest
Labels: Gods and Goddesses