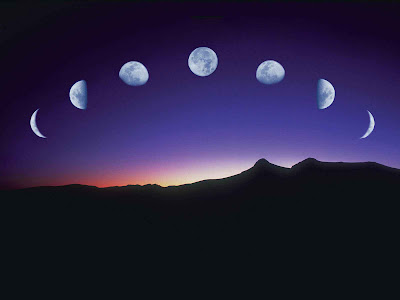 According to the Farmers Almanac full moon names date back to Native Americans, of what is now the northern and eastern United States. The tribes kept track of the seasons by giving distinctive names to each recurring full Moon. Their names were applied to the entire month in which each occurred.

This means that the name given to each moon applies to the whole cycle of the moon, from its dark beginning to its dark ending. There was some variation in the Moon names, but in general, the same ones were current throughout the Algonquin tribes from New England to Lake Superior.

European settlers followed that custom and created some of their own names. Since the lunar month is only 29 days long on the average, the full Moon dates shift from year to year.

What follows is a list of links to each Month's moon names based on the month in which the full moon occurs. I find it helpful to know the names of the upcoming moon as this gives me focus and ideas for ways to celebrate Grandmother Moon as she moves through the wheel of the year.

What follows is a list of links to each month's moon names:
Posted by Shirley Twofeathers at 12:26 PM

wow this is icredible, is a lot of names, good post, I preciate this, thank you!!!!!