Lammas - A Feast of Bread 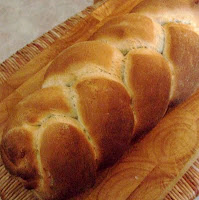 In early Ireland, it was a bad idea to harvest your grain any time before Lammas -- it meant that the previous year's harvest had run out early, and that was a serious failing in agricultural communities. However, on August 1, the first sheafs of grain were cut by the farmer, and by nightfall his wife had made the first loaves of bread of the season.

The word Lammas derives from the Old English phrase hlaf-maesse, which translates to loaf mass. In early Christian times, the first loaves of the season were blessed by the Church...

... I am so sorry to do this to you, but this post has been divided into two separate posts, and moved to my new website, The Pagan Calendar. They can be found here: Lammas - A Feast of Bread, and here: Lammas Bread
Posted by Shirley Twofeathers at 2:38 AM