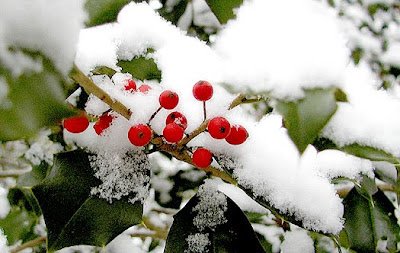 It is during June that the light of the sun reaches its culmination, and then begins its descent into earth. The Holly speaks to the fierce capacity of the human soul to take the descent into the underworld, bringing inner light into darkness. Thus we can understand the signature of the tree, with its ability to germinate without sunlight, favoring dark, moist conditions that are more strongly related to the downward earth pole. Its stiff, pointed leaves are not unlike thorns or "spears." The Holly yields a hard, white close-grained wood that imparts a quality of solidity and impermeability, as it stands in the depths of winter, impervious to cold and darkness with its somber evergreen color.

The Druid initiates developed a sacred alphabet, called the Ogham, based upon the archetypal qualities of trees. The Holly, known in Gaelic as Tinne ruled the eighth moon of the year, or the month of June. The glyph for Holly is that of a spear, meaning literally, "I am a battle-waging spear."

... I am so sorry, but this post has been combined with another and moved to my new website, Magickal Ingredients. It can be found here: Holly Magick and Lore
Posted by Shirley Twofeathers at 12:21 PM