Recognising the Power of the Universe - part 2 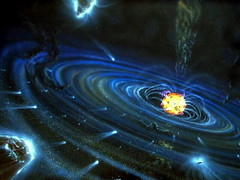 Science has worked hard to uncover the secrets of the universe. Through modern techniques, what once was mysterious has become open, even commonplace. As a result the world has become rather two-dimensional, lacking the hidden depths that the human psyche needs to grow and flourish. For too many people life has lost its purpose; it has no meaning. they work hard, overeat, worry too much about their diet. They may take a holiday once or twice a year, and bring up children, but too often there is an empty space where their souls should be....

... I am so sorry to do this to you, but this post has been moved to my new website, Gypsy Magick and Lore, hosted at shirleytwofeathers.com, and can be found in its entirety here: Recognizing the Power of the Universe
Posted by Shirley Twofeathers at 10:14 AM