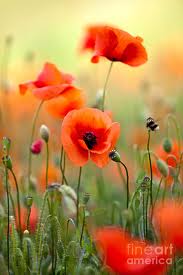 The poppy is the flower assigned to the month of August. The opiate of flowers, the poppy has hallucinogenic powers. It is used to make opium and heroin. Use the petals of the flower - it's legal - to create a dreamy effect. Bathe in the flowers to make yourself mesmerizing.

The poppy flower is most commonly associated with both death and sleep. These two themes have come about over time both because of the poppy’s anesthetic properties, and because it is said that poppies were given as offerings to the dead by the Greco-Romans. This symbolism has appeared in a variety of art forms. For example, the magical poppy fields of the Wizard of Oz, which caused those who passed through them to sleep for eternity. Poppies also appeared in Lieutenant Colonel John Mcrae’s poem “In Flanders Fields,” and were occasionally worn as a sign of respect to fallen soldiers. In legends, the poppy flower was often connected to the gods of sleep, rest and oblivion. In Christian churches during the medieval era, poppies were occasionally carved into benches to represent our restful nature as we anticipate the Last Day.

In more modern times, people like to use poppy seeds for their spicy flavor which can be baked into breads, cakes and pastries. Some forms of the poppy are still occasionally used for medicinal purposes. The California poppy, for instance, is sometimes used as an antimicrobial cleanser for cuts and scrapes, suppressing lactation, and as a pain reliever for tooth aches. Although, the California poppy is considered less potent than the red poppy (which was once used to create opium), it is still frowned upon to use in any medicinal concoction.

Although the poppy flower may commonly be used to represent death and eternal rest, it is also thought to bring many good things. For instance, mystics feel that poppies can be talismans for good luck in love, money and health, and recommend placing a small sachet of petals beneath your pillow. Because these flowers can be both lucky and respectful, they make fantastic gifts for someone who is in transition in their life. Either dried and placed in a bag, or freshly clipped and given as a bouquet, these flowers can bring nothing but good to the recipient.

From: The Encyclopedia of Magickal Ingredients

and Flower Info
Posted by Shirley Twofeathers at 5:00 AM