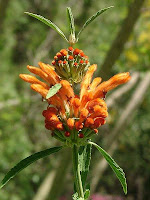 Lion's Tail (Leonotis leonurus) also known as as Lion's Ear and Wild Dagga, is a plant species in the mint family. The plant is a broadleaf evergreen large shrub native to South Africa and southern Africa, where it is very common. It is known for its medicinal and mild psychoactive properties.

Magickal uses:
This herb is reputedly endows men with the positive qualities of a lion, including their legendary sexual prowess. Eat it and see (but first read the note at the bottom of the page).

One experimental animal study suggests that "the aqueous leaf extract of Leonotis leonurus possesses antinociceptive, antiinflammatory, and hypoglycemic properties; thus lending pharmacological credence to folk usage of the herb in the management and/or control of painful, arthritic, and other inflammatory conditions, as well as for adult-onset, type-2 diabetes mellitus in some communities of South Africa."

Recreational uses:
The dried leaves and flowers have a mild calming effect when smoked. In some users, the effects have been noted to be similar to the cannabinoid THC found in Cannabis, except that it has a much less potent high. It has also been reported to cause mild euphoria, visual changes, dizziness,and lightheadedness.

It is sometimes used as a Cannabis substitute by recreational users looking to evade current laws on cannabis and other psychoactive plants. Leonotis leonorus is not currently scheduled under federal law in the United States. The smoke is reported to have an unpleasant taste and to be an irritant to the lungs and throat.

The picked and dried leaves are also commonly brewed as a minty tea.

Description:
The shrub grows 3 to 6 ft  tall by 1.5 to 3.5 feet wide. The medium-dark green 2–4 inches  long leaves are aromatic when crushed. The plant has tubular orange flowers in tiered whorls, typical to the mint family, that encircle the square stems. They rise above the foliage mass during the summer season, with flowering continuing into winter in warmer climates. A white variety (known colloquially as 'Alba'), as well as a yellow variety also exist.

In its native habitat Leonotis leonurus attracts nectar loving birds (mainly sunbirds), as well as various insects such as butterflies.

Lion's Tail is cultivated as an ornamental plant for its copious orange blossom spikes and accent or screening qualities for use in gardens and parks. It is a moderate drought tolerant plant, and a nectar source for birds and butterflies in landscape settings.

Lion's tail can especially be found in other subtropical and Mediterranean climate regions beyond South Africa such as California, Hawaii, and Australia where it has naturalized in areas. In cooler climates it is used as an annual and winter conservatory plant.


From Wikipedia
Posted by Shirley Twofeathers at 6:00 AM