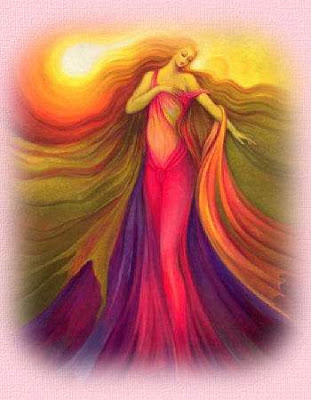 June 11 is the feast day of the Goddess Matuta, also known as Mater Matuta. Before the revision of the calendar, this was very close to the Summer Solstice. The goddess Fortuna shares the same feast day.

This Roman Goddess is the goddess of the dawn light but also has dominion over infants and sea travel. Her festival incorporated elaborate theatrical rituals enacted by Roman ladies of status in precisely this order:

Exactly what these rituals meant to the Romans is now unclear, but the first part is often interpreted as a reenactment of Dawn vanquishing nocturnal spirits. The second part may represent Matuta's nurturing the sun, who is not her child but a relative. Alternatively it's a reminder to entrust your children to family, not to strangers or slaves. This was a women's Mystery tradition. There may have been an accompanying myth that is now unknown.

Matuta is invoked to protect your sister's children. An aunt must perform the invocation, not the mother.Favored people: Newborn babies whom she protects. Obviously, others may petition on their behalf.

Posted by Shirley Twofeathers at 11:45 AM