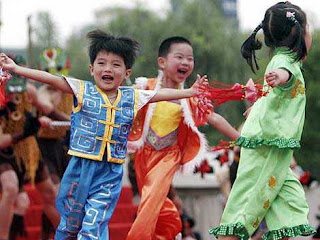 On the 5th day of the 5th lunar month, Chinese communities celebrate the Duan Wu Festival 端午节, also known as the Dumpling Festival, or the Dragon Boat Festival. As it is a Chinese Lunar date, it falls on different days on the Gregorian calendar. In 2013, it falls on June 12.

In Korea, rice farmers wash their hair in a stream on this day as part of an annual ritual to dispel bad luck and to ensure an abundant crop. This ritual has taken place since ancient times.

Dano, also called Surit-nal, is a Korean traditional holiday that falls on the 5th day of the fifth month of the lunar Korean calendar. It is an official holiday in North Korea and one of the major traditional holidays in South Korea. South Korea has retained several festivals related to the holiday, one of which is Gangneung Dano Festival (강릉단오제) designated by UNESCO as a "Masterpieces of the Oral and Intangible Heritage of Humanity".

In the Mahan confederacy of ancient Korea, this was a day of spiritual rites, and enjoyment with song, dance, and wine. Traditionally, women washed their hair in water boiled with Sweet Flag (changpo (창포)), believed to make one's hair shiny. People wore blue and red clothes and dyed hairpins red with the iris roots. Men wore iris roots around their waist to ward of evil spirits. Herbs wet with dew on this morning were said to heal stomachaches and wounds. Traditional foods include surichitteok, ssuktteok, and other herb rice cakes.

The persisting folk games of Dano are the swing and ssireum (씨름). The swing was a game played by women, while ssireum was a wrestling match among men. In addition, mask dance used to be popular among peasants due to its penchant for satirical lyrics flouting local aristocrats.

Three of the most widespread activities for Duanwu Festival are eating (and preparing) zongzi, drinking realgar wine, and racing dragon boats.

Other common activities include hanging up icons of Zhong Kui (a mythic guardian figure), hanging mugwort and calamus, taking long walks, and wearing perfumed medicine bags. Other traditional activities include a game of making an egg stand at noon, and writing spells. All of these activities, together with the drinking of realgar wine, were regarded by the ancients as effective in preventing disease or evil and promoting health and well-being.

Found at: Wikipedia
Posted by Shirley Twofeathers at 7:00 AM