Marigold must be taken only when the moon is in the Sign of the Virgin... And the gatherer, who must be out of deadly sin, must say three Pater Nosters and three Aves. It will give the wearer a vision of anyone who has robbed him. 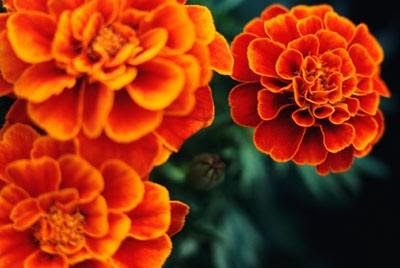 Marigolds are a sturdy annual and quite familiar. They have been domesticated into a variety of sizes, some with tiny flowers, and others large and magnificent. Most have a golden color, but may range from bright yellow to deep, dark hues. The flowers may be gathered when in full bloom and hung upside down in a warm and dry place until the petals are completely dry.

They were said to relieve hiccups and the effects of being struck by lightning. No wonder they were considered magical plants. The marigold has healing properties and is used as a natural antifungal, antiseptic, and antibacterial treatment. Add the fresh flowers to salad greens and eat to promote good health and strengthen the immune system.

Make a tea by steeping the flowers and drink to solve love problems. Pour a quart of the tea into your bathwater on a Sunday to increase your popularity and admiration among peers. The seeds are sacred to Apollo and, when eaten, bring visions.

The marigold flower is rife with a variety of symbolism. To start, these flowers are called “the flower of the sun” and are representative of passion, warmth and creativity. To others, this flower is a symbol of comfort and contentment with simplicity. As a gift, marigolds may be a great expression of either warm or fiercely passionate love, or a simple way of saying that you feel happy and comfortable with the recipient. These flowers are sometimes given in themed gift baskets, but they are most commonly used in vibrant bouquets.

There are a number of different flowers commonly known as the Marigold, and when it comes to lore and magick, it can be confusing. Here is a list of the different types of marigolds as well as their latin names and links to their pages on wikipedia:

Much of the traditional herbal lore and older magickal information about the Marigold, is actually referring to the Pot Marigold or Calendula. What follows is what I have found that I am sure relates to the Common Marigold (tagates).

Marigolds are used as Visionary Herbes, and are part of the lore of Mexico. In that country it is sometimes said that they have their origin in the blood of the native peoples slain by the invading Spaniards. Marigolds are found in recipes for love divination, and it is also said that they give off bright sparks of light during a thunderstorm.

The species Tagetes lucida, known as "pericón," is used to prepare a sweetish, anise flavored medicinal tea in Mexico, brewed using the dried leaves and flowering tops. It is also used as a culinary herb in many warm climates. Dried leaves are ground into a powder then used as a tarragon substitute for flavoring soups, sauces etc. and offered in the nursery as "Texas tarragon" or "Mexican mint marigold."

The petals are used as a condiment. A yellow dye can be obtained from the flowers. The dried plant is burnt as an incense and to repel insects.

The marigold was regarded as the flower of the dead in pre-Hispanic Mexico, parallel to the lily in Europe, and is still widely used in the Day of the Dead celebrations to decorate ofrendas, papier mache and ceramic statues, altars, and graves of family members. This is because their scent is thought to draw back the souls of the dead.

Tagetes lucida was used by the Aztecs in their ritual incense known as Yauhtli. Aztecs used Tagete lucida both as a medicine and in rituals where they blew a powder made from the flowers on the faces of victims before the sacrifice.The plants was linked to the rain's god Tlaloc. The plant is also used by the Huichol, mixed with a potent wild tobacco (Nicotiana rustica), for its claimed psychotropic and entheogenic effects.

Tagetes minuta, native to southern South America is a tall upright marigold plant with small flowers, and is used as a culinary herb in Peru, Ecuador, and parts of Chile and Bolivia, where it is called by the Incan term huacatay. Huacatay paste is used to make the popular potato dish called ocopa. Having both "green" and "yellow/orange" notes, the taste and odor of fresh Tagetes minuta is like a mixture of sweet basil, tarragon, mint and citrus. It is also used as a medicinal tea in some areas.

The marigold is very significant in Nepalese culture where marigold garlands are used almost in every household especially during the Tihar festival. It is always sold in the markets for daily worships and rituals.

The marigold is also widely cultivated in India and Thailand, particularly the species Tagates erecta, Tagates patula, and Tagates tenuifolia. Vast quantities of marigolds are used in garlands and decoration for weddings, festivals, and religious events.

In Ukraine, Tagetes erecta, Tagetes patula, and the signet marigold, Tagetes tenuifolia are regarded as one of the national symbols, and are often mentioned in songs, poems and tales.

Posted by Shirley Twofeathers at 10:13 PM