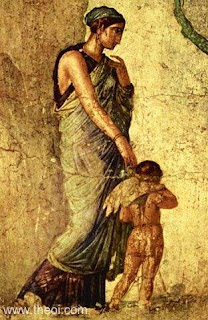 In ancient Rome, September 26 was the Festival of Venus Genetrix ("Mother Venus"), and celebrated her role as the ancestress of the Roman people.

Venus was originally the Italian goddess of fertile soil, the presiding spirit of the vegetable garden. She was a rustic garden goddess with a relatively minimal cult until the Romans identified her with the Greek goddess of love, Aphrodite. According to Roman legend, the Romans were descendants of Trojan refugees, the last survivors who escaped the burning city and fled to Italy, where they founded the city of Rome. These Trojans were led by Aeneas, whose survival was ensured by his mother, Greek goddess Aphrodite.

Julius Caesar traces his ancestry to one of Aeneas' sons, Aphrodite's grandson. He wished to honor his divine ancestress, but Aphrodite was a bit too foreign for Roman taste and too associated with the sea and lascivious rites. A homegrown Aphrodite was sought and found in the beautiful, fertile, vegetable goddess Venus. Julius Caesar dedicated a magnificent temple to Venus Genetrix in the Roman Forum.

In addition to assuming Aphrodite's traditional attributes and functions, Venus evolved into an ancestral goddess of the Roman elite, those who descended from Aeneas. Venus and mars, ancestor of Romulus, founder of Rome, serve as the guardians of Rome.