Neptune - Lord of the Waters 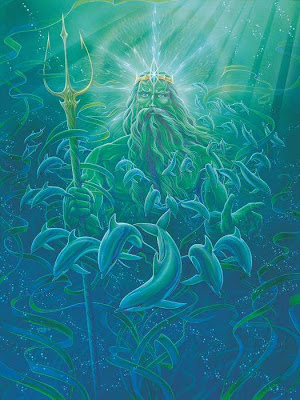 Although Neptune is now considered the Roman Lord of the Sea, he was originally a freshwater spirit. His associations with the ocean derive from his identification with the Greek Poseidon. The identities of the two originally distinct spirits are now so intertwined that it is virtually impossible to distinguish between them. Their names are used interchangeably. If you search for information about Neptune, you will almost certainly find only information that originally pertained to Poseidon. Little information survives regarding Neptune prior to his identification with Poseidon. However, we know that the Romans invoked Neptune to protect fresh water, especially for agricultural uses.

July 23, his Roman feast day known as the Neptunalia. His festival was celebrated with feasting. Games were held in Neptune's honor.

Neptune was also held in high regard as Neptune Equestor, the god and patron of the extremely popular horse races and of horses. As early as 206 BC, one of his temples was located near the Circus Flaminius, one of the larger trace-tracks and the place where the equites, members of the equestrian class, mustered for their ceremonies outside the pomerium or ceremonial boundary of the city. The horse connection was obvious: Neptune Oceanus was often depicted surfing on a sea shell towed by "sea horses" (actually hippocampi, half horses and half fish -- in front to back order, of course: think of the alternative!) Part of the Neptune/Poseidon myth is that he gave the first horses to men.

Posted by Shirley Twofeathers at 9:40 AM

Email ThisBlogThis!Share to TwitterShare to FacebookShare to Pinterest
Labels: Gods and Goddesses, July Spells and Rituals