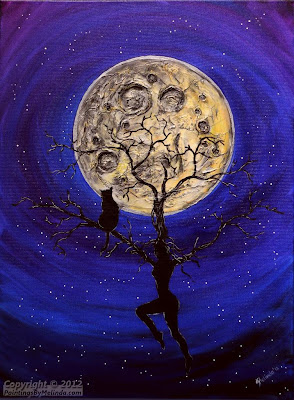 If the full moon fell on a Friday that was also the thirteenth, it was considered the most unlucky day there could be.

Some farmers still believe that crops sown near a Full Moon will be ready for harvest a month earlier than crops sown during a waxing moon.

Wood cut at the Full Moon is easy to split. (On the New Moon - difficult to split).

Grass crops should be sown at the Full Moon. Then the hay will dry quickly.

The Fenland country of England is a very strange place and has kept its superstitions longer than other areas. They say that if public dinners are not held at a Full Moon, tragedy will follow. Since Fenland roads are built high above the marshy land and bordered on both sides by deep ditches, one can see why this is more sense than superstition.

The Gaelic word for fortune comes from "that which denotes a Full Moon." The Druids believed that when the circle of the Moon was complete, good fortune was given to those who knew how to ask the gods for it.

It is said that cats' eyes will be open wider during a Full Moon than at any other time.

In Ireland, it is said that if you walk nine times around a faery rath or hill at the Full Moon, you will be able to find the entrance.