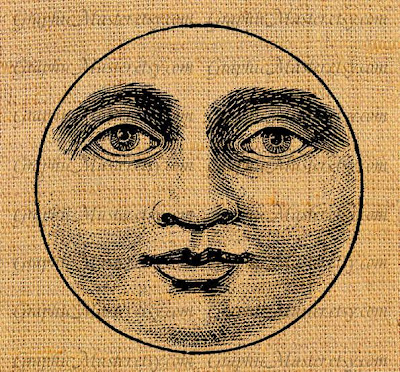 Moon Men:  In medieval Europe and England, "Moon's men" were thieves and highwaymen who plied their trade by night. The current term "moonlighting" is similar, meaning to hold down an additional night job.

Moon Struck: Originally, the term Moon-struck or Moon-touched meant chosen by the goddess. These people were considered to be blessed.

Moon Calf: A Moon-calf now means someone who is absent-minded or not very bright. At one time it described a person who was so carried away by love of the Goddess that he/she was nearly oblivious to the world around them.

Moonrakers: In certain parts of England, the term "Moonrakers" eventually came to mean simple-minded people. The factual story behind this, reveals some pretty fast thinking by local smugglers. The English excise men (a combination of border patrol, ATF, and IRS) were out at night, trying to catch the smugglers red-handed. Hearing the excise men coming, the smugglers sank their loot in a lake and pretended to be fishing for the Moon reflected in the water. When the excise men asked what they were doing, the smugglers innocently replied they were raking for the moon. The excise men went away shaking their heads over the stupidity of the local folk, while the smugglers fished up their goods and went on with their business.

Lunatic: The term "lunatic" was used as far back as Roman times to describe someone who was mentally unbalanced. May cultures believed that sleeping out in the moonlight or where the moonlight came in through a window would cause mental illness and/or blindness

Moon-Eyed People: Moon-eyed people is a term referring to a race of people allegedly remembered by the Cherokee when they came to their homeland in the Appalachians. The group was described in 1797 by Colonel Leonard Marbury. According to Marbury, when the Cherokee arrived in the area they had encountered a "moon-eyed" people who could not see in the day-time. They were said to track time by watching the night sky.

Posted by Shirley Twofeathers at 7:30 AM

Thanks for the info on origins of "moon" phrases.
CLM