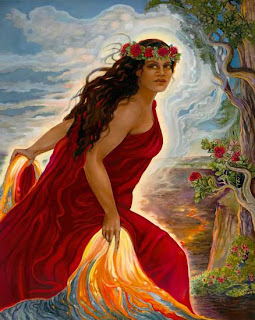 About Pele: In Hawaii, Pele's fires develop and redevelop the islands through volcanic activity. It is this creative force that comes into our lives today, cleansing, transforming, and rebuilding, augmented by summer's fiery energy.

According to local legend, it is unwise to take any souvenir from Pele's mountain without asking or leaving a gift, lest bad luck follow you everywhere. She is zealously protective of her lands and her children. Traditional offerings include coins, strawberries, hair, sugarcane, flowers, tobacco, brandy, and silk.

Kamehameha the Great was the monarch of Hawaii between 1782 and 1819. He is well-known and respected for uniting and establishing the Kingdom of Hawaii in 1810. Kamehameha Day is held in his honor on June 11 each year.

King Kamahameha united the Hawaiian people, protecting commoners from the brutality of overlords, much as Pele unites them through her creative, protective power. This festival commemorates him and the traditions of Hawaii through arts and crafts, paradse, hula dancing, and luaus.

At home, this might translate into having some tropical foods served steaming hot (the heat represents Pele's activiting energy). For example, eat pineapple fried in brown sugar for sweet harmony. Or consume fresh strawberries soaked in brandy to ignite your inner fires with Pele's inspiration. Finally, wear something red today to energize Pele's attributes in your efforts all day long.