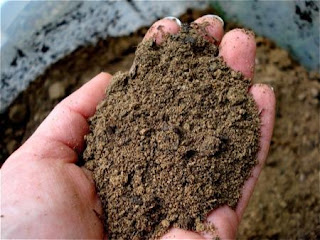 Earth magic - or magicks that utilize dirt, the substance of the earth - utilizes two main techniques: burying and transporting. We transport basically anytime we use earth in a spell that does not include the burial of the item or take place directly upon the soil. For example, if a loved one tracked muddy footprints into my home and I swept them up and saved the dirt for later use in a healing spell, this would be considered transporting.

You may bury things in the earth for the purpose of cleansing an item of negative vibrations, ridding yourself of an item (banishing), planting seeds for future growth of crops, or blessing an item.

You may transport the element of earth by placing soil in a charm bag or in your home, using a mud mask, or even growing houseplants. Many magical practitioners make use of dirt by piling it on their altar and burning candles in the pile. As dirt is sacred, it is fine to do this.

It doesn't matter which of the techniques you use - burying and transporting both hold the full power of earth, even when the soil is used in small amounts.

Various kinds of dirt are said to perform specific functions in many magical practices. According to Hoodoo and Voodoo traditions  graveyard dirt is thought to hold within it the vibrations of the departed soul. The ritual collection of graveyard dirt includes getting in touch with the spirit of the body in the grave and leaving a payment for the dirt (usually a coin on the gravestone). For instance, if your intention was to use the dirt to cause harm, you would find a grave that held a murder victim or some other tragic soul and use the dirt frm it. Also incorporated into the ritual collection of graveyard dirt is the time of day in which the dirt is collected and the corresponding area of the body in the grave. In other words, for a love spell, you would take dirt from the area where the heart of the body lies.

Dirt from a crossroads is considered sacred in almost all magical traditions. It is believed to be loaded with supernatural powers. it is used for protection, blessings, banishing, domination - virtually any purpose. It is thought to be neutral, so one has only to direct it according to one's wishes.

Santeria incorporates the magical qualities of dirt in the following ways:
From: Elemental Witch