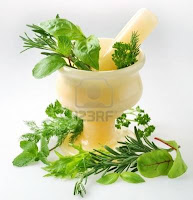 This a  basic listing of herbs and spices associated with the element of earth:

Posted by Shirley Twofeathers at 7:35 AM