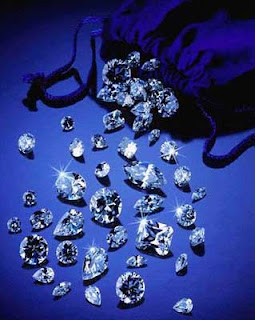 The diamond is the precious gemstone most commonly associated with the month of April. Legend has it that Europeans first "discovered" African diamonds in a shaman's leather pouch. Though reports of this legend are sketchy, if it is based on fact the African shaman might have used his diamonds much as shamans in other parts of the world use quartz crystals.

Anciently, diamonds were worn as polished stones. They were treasured for their beauty, but it wasn't until recently that their dazzling appearance was created. After people discovered that applying a bit of pressure at the correct point on a diamond produced a facet, the stone was prized for its prismatic fire.

Today, the world's supply of diamonds is carefuly controlled to maintain an artificially high price - a surplus of diamonds on the market considerably lowers their worth.

Such greedy measures haven't lessened the magical value of the diamond. Because these high prices keep many of us from experimenting with the ritual uses of diamonds, these magical substitutes can be used with satisfactory results:
Magical uses:

The diamond has a wide and varied magical repertoire. Worn, it promotes spirituality, even ecstacy, the shaman's ritual state of consciousness. It is often utilized in meditation and in spiritual pursuits.

When carried or worn, the diamond promotes self-confidence in relations with the opposite sex. It is said to be potent for relieving or eliminating the root causes of sexual dysfunction. Worn for this purpose, it removes cultural (some might say patriarchal) blockages that have caused generations of women to be nonorgasmic. The diamond is a cleansing, purifying, and releasing stone in matters of sexuality.

To stimulate someone to be more sexually receptive toward you, bestow the gift of a diamond, magically charged with your own desires.

To heal your own sexual inhibitions and dysfunction, don't wait for someone else to bestow the gift. Provide your own diamond, charge it with your desires, and bathe it in spring water enhanced with hibiscus flower essence and wear it.

In India, women (presumably rich) wear an unblemished white diamond with a slightly black hue to ensure male children. It is also worn to conquer infertility.

Though the diamond is not a stone of love, it is worn to ensure fidelity and to reconcile quareling lovers. Today, it is, of course, the most popular wedding stone, due in part to aggressive advertising, but other stones are perhaps more appropriate. This usage has no ancient history.

Because of its hardness and associations with the Sun, the diamond is worn or utilized in spells to increase physical strength. In ancient Rome, it was set in steel rings and worn with the stone touching the skin. This produced bravery, daring, and victory. It is still worn today for courage.

In the ancient magic of India, a diamond set in a platinum or silver ring was worn for victory in battles and conflicts. It was also fastened to the left arm for this purpose.

The diamond, owing to its flashing nature, has long been regarded as a stone of protection. For best results, and to ensure its wearer luck, the diamond should be faceted into a six-sided cut.

Rather surprisingly, owing to the above associations, the diamond is a stone of peace when worn. It relieves nightmares and encourages sleep at bedtime.

Try scrying with a faceted diamond in soft candlelight, dazzling yourself in its inner world of color and light.

From Cunningham's Encyclopedia of Crystal, Gem and Metal Magic