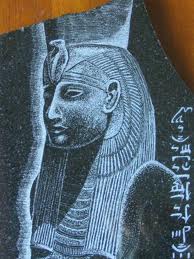 Titles: Lady of Heaven; Queen of Deities; Mother of the Mothers

Her name means "mom." Mut, the vulture goddess, is the spirit of maternity. So potently fertile that she conceived and gave birth to herself, Mut, an extremely beloved goddess, was venerated throughout Egypt. She bestows personal fertility and protection.

Although originally a local goddess, she became a national goddess during the New Kingdom (approximately 1550 - 1070 BCE). During this era, the brides of Pharaohs, queens of Egypt, served as Mut's chief priestesses. Originally venerated as an independent goddess, as Mut became increasingly popular, she absorbed characteristics of other goddesses. Eventually a marriage was arranged between mut and the state deity Ammon and Mut assumed the role of the less popular Amonet. Mut is sometimes identified as the Eye or Ra.

Manifestation: Mut appears as a crowned vulture, a white vulture, or a woman who may have wings and/or wear a vulture headdress.

Iconography: Later depictions of Mut portray her as a lioness, a cow, or a cobra-headed goddess, but this may derive from identification with other goddesses, especially Sekhmet.

Offerings: Incense. If you wish to give a traditional  lavish, offering, give two hand mirrors: one silver, one gold. You are symbolically giving her the moon and sun.

Email ThisBlogThis!Share to TwitterShare to FacebookShare to Pinterest
Labels: Egyptian Gods and Magick, Gods and Goddesses