The moon is perhaps humankind's oldest form of marking time. According to some scholars, the Celts used a Lunar Calendar that consisted of 13 months, each 28 days in length. Each month of the Celtic Lunar calendar bears the name of a tree, which also stands for one of the consonants in the Celtic 'tree alphabet'. There are basically two different versions of this Lunar calendar: the Beth-Luis-Nion (which begins on the Winter Solstice) and the Beth-Luis-Fearn (which begins on Samhain). 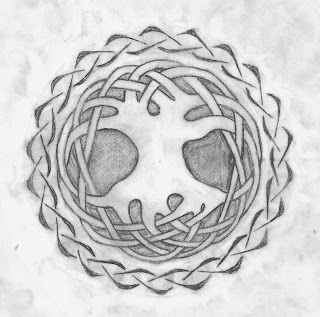 
The five vowels I, A, O, U, and E have corresponding tree names to the nights of the solstices and equinoxes:

Copyright 1999-2006 Sarah Nunn
Image from: Geordie Milne
Posted by Shirley Twofeathers at 6:57 AM