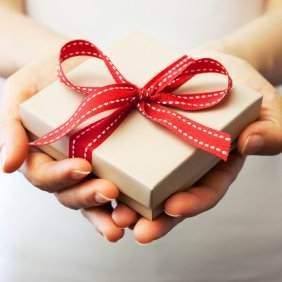 Even the giving of gifts can be a ceremony all of its own. In Sweden and Germany there was a tradition until recently of the julknap, a gift wrapped in layers of paper or cloth. The person bringing the gift would knock at the door and when it was opened fling the package into the house before running off.

This was sometimes used as a means of making a marriage proposal or declaration of love, in which case a golden heart or letter (or even the person making the proposal) was hidden within.

There is a story about a certain Major Jones of Georgia who decided to follow this custom. He climbed into a meal sack suspended from a hook on the porch of his true love's house and spent the night there. However, he forgot the wind - it blew all night and caused the sack to swing to and fro, like the swaying of a ship. As well as seasick tablets he had also forgotten dog repellent and, unfortunately, the house dog paid him close attention throughout the night!

From: The Winter Solstice