The Great Physician,
Queen of Physicians,
Lady of Birth and Mother of Dogs,
The Lady Who Restores To Life 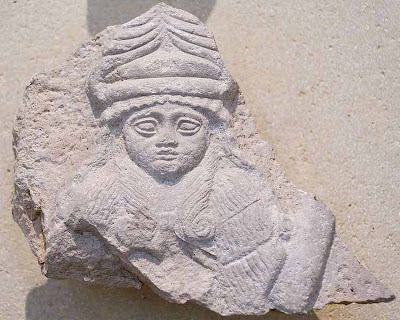 
Bau (also known as Gula), Goddess of Healing and Life, was once among the most significant deities of the Sumarian pantheon. She is intensely associated with dogs and may appear as a dog-headed woman. It is very tempting to associate her name with "bow-wow." Dog and puppy burials have been found amidst her temple ruins.

Field of influence: The internal heat of the earth. Healing, therapeutic arts. She was the Goddess who wrote a man's destiny at his birth, was petitioned to change this destiny, to heal diseases and to prolong lives. Patron of physicians; Goddess of inflicted illness and restored health. Also associated with the underworld; possibly a former death goddess. Could cure or cause sickness.

Appearance: A mature goddess, stocky and short in stature. Her black hair was straight and held in place by a gold circlet inset with pieces of carnelian. She wore a full-length robe of bleached wool with long sleeves. Also known as Gulu, (the earth-goddess, mother goddess; and Ninmah, goddess of the underworld) - she sits below ground with her dog, where the cosmic serpent begins to rise. She is the patroness of herbs, healing, life, as her flowered garment shows. Hands lifted in prayer, she sits with her dog, defender of homes, while before her a Scorpion Archer mounts guard at the uttermost bound of the earth (cosmic sea), to defend against demonic powers and protect the rising and setting sun.

Sacred Animal: Dog/Bitch; it is uncertain whether Gula was imagined as having canine form or the dog was sacred to her, since the antiseptic action of a dog's tongue in licking wounds was early recognized. She was sometimes addressed as Bawa, which may have been either a name or an epithet, and could have been onomatopoeic ('bow-wow').

Occupying a threshold between the world of the living and the dead, a faithful friend and guardian of Hades, the dog can symbolize a connection between consciousness and the unconscious.

Legends: Helped breathe life into mankind after the Great Flood. After seeing the terrible destruction wrought by the Flood and losing her husband to the Netherworld, Gula became interested in caring for the sick and wounded in the Great Above. And so, after the raging of the storm god NinUrta, she smiles down upon them as the rainbow or as in Hungary in the mirage of the sun called the "déli BÁB" on the the moist lowlands of Hortobágy. She feeds them, brings new life and is the protector of birth, the mother, the baby and life in general. In all the folds of her skirt are hidden unborn children.

Historical information: The Sumerian BAÚ saw her prominence around 2,500 BC and earlier. She was once the third in rank among the ancient Sumerian gods. She is also called GULA by Sumerians and is mentioned to be the goddess of bounty, a healer, provider of harvest and food, giver of birth and fertility etc. She was also BABA the life giver (midwife) who helps bring life into the world, GAL-AMA =the great mother, or NIN-AN-NA the queen/lady of heaven.

She has a prominent role in incantations and incantation rituals intended to relieve those suffering from disease. And could also be invoked to curse those who trample upon the rights of rulers (elections were held in her temple) or those who do wrong with poisonous potions.

Various Sumerian hymns praise her as the giant Gúla, who heals, she is the queen of heaven, and is the "light of the world". She is also called the quickener of the dead, which may refer to the idea that she may quicken the rebirth of the spirit of the dead and shorten their stay in the underworld.

In her later Babylonian incarnation, Gula Bau, spirit of healing, walks the Earth accompanied by her pack of hounds.

Offerings: Build her an altar featuring dog imagery; appropriate gifts would include contributions to dog shelters and hospitals, or acts on behalf of dogs in need.

Birthing ceremony: In the southern Hungarian city of Szeged it was recorded that the women celebrated her in a closed ceremony, where only mothers were allowed. The eldest most respected mother offers to the goddess, a plate of pastries and wine to thank the successful birth of the new mother. Not performing this ritual means that the girl or boy will not find a suitable mate in their adult life. Similarly in Sumerian cylinder seals show a row of women lined up to offer cake and drink to the goddess BAÚ sitting on an elevated throne.

, Wiggage, and the work of Dr. Ida Bobula
Posted by Shirley Twofeathers at 1:19 AM

Email ThisBlogThis!Share to TwitterShare to FacebookShare to Pinterest
Labels: Gods and Goddesses